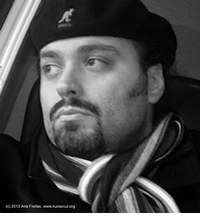 Notable for his compelling and emotion-driven music, Nuno Cruz has received two awards of excellence and one award of merit as well as having collaborated as composer in multiple award-winning films and video games.

Alongside his film scoring duties, Nuno also teaches music theory and guitar. Additionally, he serves as an ambassador to The International Film Music Society, a non-profit organization aimed at Increasing awareness of the artistic, historical, and commercial value of film, television, and video game music.

You have allowed cookies to be placed on your computer. This decision can be reversed.

We use cookies on our website. Some of them are essential for the operation of the site, while others help us to improve this site and the user experience (tracking cookies). You can decide for yourself whether you want to allow cookies or not. Please note that if you reject them, you may not be able to use all the functionalities of the site.